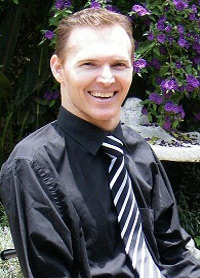 Victor Vermeulen had it all! From a very early age, he'd excelled at both academics and sports and boasted an expansive list of bursaries and awards. He could have represented his country at any number of sports but his first love was always cricket. At 19 he'd already played with a young South African team at Lords the famous English test ground and was settling into a career with Transvaal. It was really just a matter of time, it was felt, before he would be given the opportunity to go in and bat for South Africa.

Then, a freak accident left him paralysed from the neck down with little apparently to look forward to, only memories of a dazzling past and thoughts of what might have been!

Victor however, as his name implies, is made of sterner stuff! He didn't dwell on the past, but looked at the positive aspects of his situation and with his mother Isabel’s support and encouragement, set off down a new path as a motivational speaker.

A natural communicator, Victor's message is a universal one, that it is possible, no matter what the difficulties, to achieve your goals and fulfill your ambitions.

His extraordinary story of courage, optimism and sheer determination is told in his best-selling book 'The Victor Within' (Tenacity Publications) which has the following forewords by Nelson Mandela (Mentioned Above) and the late Christopher Reeve.

Wanting to book more Corporate Entertainment - We have South Africa`s TOP Artists.
Hire a Comedian, Master of Ceremonies, Live Bands, Dance Acts, you can even Hire a Magician We have the very BEST in Live Entertainment for your function or event.