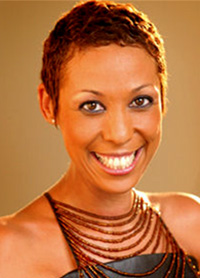 Ursula Stapelfeldt has also hosted numerous high profile events such as Miss South Africa Pageant, the Presidential Sport Awards, and countless corporate functions, and was a presenter on 5FM for 10 years, and guest presenter on Radio Express in Los Angeles, California.
Ursula Stapelfeldt Chikane is widely recognised as one of South Africa’s most talented presenters, both on and off TV. Her natural ebullience and enquiring mind equip her admirably as a television interviewer and radio presenter.

Ursula Stapelfeldt was also one of the three original hosts of SABC 2’s “Top Billing”, as well as the original co-host on MTN Gladiators and is currently seen hosting "The Bar One Manhunt" on SABC 3 at 20h30 on Wednesdays and on the radio, Ursula hosts the radio show, “Jammin’ Africa” which broadcasts throughout the continent weekly.

With a Public Relations Diploma and two years as the Media and Marketing Officer of the South African Football Association, Ursula is never happier than when “dealing with people”.

Her television credits include the presentation of TV1’s TopSport, both inside and outside the studio.

Whether on Television, Radio or the stage, Ursula Stapelfeldt Chikane brings a professional, celebrity touch, and as an MC, her refreshing approach has made her a firm favourite across the land.

Are you wanting to book more Corporate Entertainment - We have South Africa`s TOP Artists - Hire a Comedian, Master of Ceremonies, Live Bands, Dance Acts, you can even Hire a Magician
We have the very BEST in Live Entertainment for your function or event.