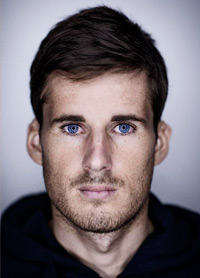 Davey du Plessis is a passionate individual driven by his quest to make a positive difference in the world through working with individuals and groups on all levels while inspiring everyone to explore their unique gifts and potential. Davey du Plessis utilises adventure as a source of experience to further learn and understand the nature of humanity, as well as an avenue for experience that demonstrates the unlimited potential of the human spirit.

His compassion towards the environment and animal kingdom reflects in his choice of a plant-based diet and his belief that all life should be respected and protected. Davey du Plessis has researched nutrition in depth and has come to an understanding of what he believes to be optimal nutrition for daily living. Sharing his passion for life, Davey du Plessis actively encourages all to live a life fulfilled, contributing positively to the greatness of humanity. Through his life experiences and adventures, Davey du Plessis has realized the profound power of compassion and acceptance and actively encourages all humans to adopt these positive traits into their lives. In 2011, Davey cycled from Egypt to South Africa, with friend Ricki Nethercote, and through representing Habitat for Humanity, they managed to raise enough funds to assist a family in Tanzania complete the building of their house.

Davey du Plessis`s first book, “Choosing to Live”, based on the Amazon experience, was published in October 2013, and is available through book stores and online as an eBook. The first print run sold out in 2 months and the second print is now available. The following newspapers have covered the story and interviewed Davey: The Sunday Times, The Daily News, The Knysna Plett Herald, The PE Herald and The Natal Witness. Davey du Plessis was interviewed on Kyknet’s Ontbytsake, and has been interviewed on National Geographic Radio (USA), 567 Cape Talk, Voice of the Cape, Talking Possibility, SAFM and East Coast Radio. He has been featured in the Mens Health, Discovery Health and Wellness Warehouse magazines, and has written articles for Intrepid Explorer magazine and Adventure Kayak (Canada) magazine.

In 2012, Davey du Plessis embarked on a solo source-to-sea navigation of the Amazon River, to raise awareness regarding the various environmental challenges facing the Amazon region. While making good progress, already having summited Mount Mismi (the source of the Amazon) and having navigated some daunting rapids, Davey was ambushed, shot and left for dead. Wounded and bleeding, in one of the more isolated parts of the Amazon, Davey du Plessis adventure turned into a moment to moment life and death struggle for survival, as he made his way through the jungle looking for rescue and seeking safety. With the support and assistance of local communities, Davey incredibly survived. Through his reflection on the incident, Davey du Plessis shares a message and belief in the power of acceptance and compassion in humanity.

Davey du Plessis was recently selected to give a talk at TEDx Cape Town, has spoken at FEAT and has been invited to address the YPO on a number of occasions. Davey du Plessis’s next adventure is planned for early 2015, details of which will be announced early in 2014, once certain logistics have been finalised. The project will involve an ocean crossing, with a purpose built, environmentally friendly boat being constructed at The Wooden Boat Shop in Woodmill Lane, Knysna, allowing the public to follow the adventure right from the start. The focus will be on encouraging people to donate actions rather than money, to positively address many of our current environmental challenges.

Davey has spoken with various groups and organizations and adapts his presentation to the event and audience. He speaks with passion and an endearing openness that leaves audiences touched and inspired.

Hire Corporate Entertainment - We have South Africa`s Finest Artists. Hire a  Comedian, Master of Ceremonies, Live Bands, Dance Acts, you can even Hire a Magician - We have the very BEST in Live Entertainment for your function or event.