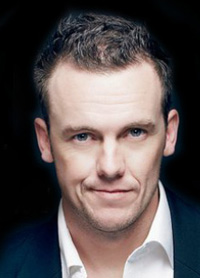 Darren "Whackhead" Simpson is a South African comedian and radio and television personality best known for his morning radio pranks on 94.7 Highveld
Stereo, and for co-presenting the M-Net comedy prank show Laugh Out Loud, from 2005-2007.
Born in Durban, Darren Whackhead Simpson got his start in comedy clubs, but quickly progressed onto bigger and better things. He now juggles his time on
the Rude Awakening, stand up and corporate events, and television.
Darren Whackhead Simpson has worked as far afield as Australia (at Kool Fm) and Heartbeat FM in London.

In 2003 Darren Whackhead Simpson appeared on SABC3's Comedy Showcase, and he has also performed in SABC 1's Pure Monate Show.

In 2005 he appeared on the first season of Laugh Out Loud, and continued with the show when it was renewed.

He is also well known for terrorizing unsuspecting victims with his "Whackhead" phone pranks.

In December 2004, 94.7 Highveld Stereo released "The Best of Whackhead's Phone Pranks" on CD, and it remained on the best sellers charts for five weeks
and achieved gold status.

In April 2008 he began presenting the M-Net show Clipz, which highlights whacky videos making the rounds on the Internet.

Book Corporate Entertainment - We have South Africa`s TOP Artists. Hire a  Comedian - Master of Ceremonies - Live Bands - Dance Acts, you can even Hire a Magician - We have the very BEST in Live Entertainment for your function or event.